Near edge X-ray absorption fine structure (NEXAFS) and scanning transmission X-ray microscope (STXM) spectrometry are valuable techniques in the analysis of the organic fraction of particles. NEXAFS uses non-destructive soft X-ray beams to distinguish organic functional groups absorbing at different bonding energies of carbon-containing molecules. Combined with STXM we obtain a two-dimensional map of particle composition and morphology. The data compiled from NEXAFS-STXM is clustered and analyzed to classify most condensed-phase organic compounds which we can identify. NEXAFS-STXM has been utilized in the following studies to improve our scientific understanding of the 30-90% of organic material that can be contained in an aerosol particle and ultimately how the different types can affect CCN properties, interaction with solar radiation, and aerosol chemistry differently. 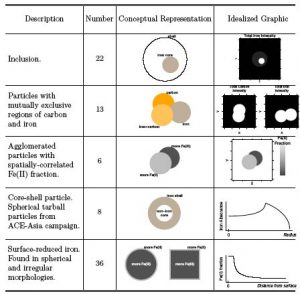 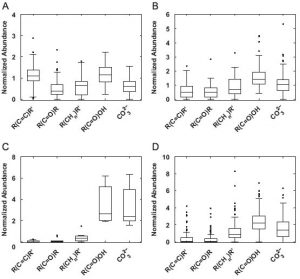 NEXAFS and STXM measurements are used in this study to provide insight on iron distribution and oxidation. Sixty-three iron-containing particles from five field campaigns revealed a size range of 0.2-4.5 um and oxidation states with average Fe(II) to Fe(II)+Fe(III) ratios ranging from 0.0 to 0.73. No consistent correlation was found with Fe(II) fractions and organic functional groups.

NEXAFS-STXM was used to summarize the organic functional group abundance and morphology of 595 atmospheric aerosol particles. Seven different campaigns revealed 14 different classes of organic particles that were thus related to their location and period to which they were collected. Particles resembling black carbon, humic-like aerosols, pine ultisol, and secondary aerosols were identified by comparison to other published spectra. 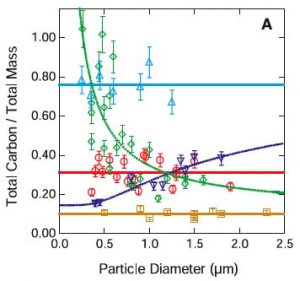 Aerosol particles from mineral dust and combustion emissions in Africa, Asia, and N. America were analyzed with the use of STXM technology to find that many of the carbonaceous components have reaction rates that are three times slower than those previously used in climate models. These reaction rates may mean that global organic aerosol burdens are under-predicted by 70%.