Aerosol particle formation and growth is critical to understanding aerosol sources, processes, and impacts. This is due in part to aerosols traveling long distances that can allow them to change their intrinsic properties over time, and thus form secondary organic aerosols (SOA). Oxidation is often the process in which a primary organic aerosol can become SOA such as sulfur emissions becoming sulfate (SO42-). The effect of these formation and growth transitions can directly or indirectly change the Earth’s radiation budget and therefore the radiative flux received by the Earth’s surface. Increasing the number of cloud condensation nuclei (CCN)-sized particles, for example, can produce an indirect effect by creating longer lived and brighter clouds with also less precipitation events. Direct effects include differences in scattering and absorbing radiation. Ultimately anthropogenic sources of aerosols and their formation and growth in the atmosphere can be seen as changing the Earth’s albedo (or reflectivity), which needs to be fully understood to assess global warming. 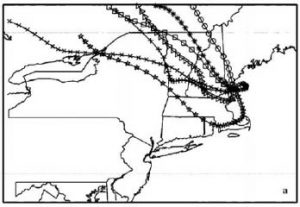 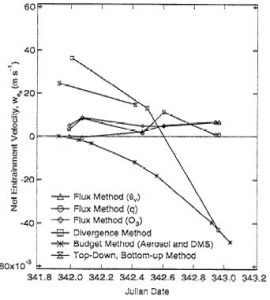 This ground-based study found that there were no consistent changes in particle composition following 48 observed events of SOA formation using assumed alpha- and beta-pinene as assumed primary precursors, yet high aerosol mass fractions (yields) at low changes in aerosol mass were found to be up to two orders of magnitude greater than previously predicted in laboratory simulations. 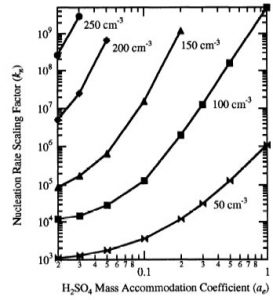 An aircraft-based study of a second turbulent layer found the turbulent entrainment in two directions across the interface. DMS and aerosol particle budgets were used to track the bidirectional entrainment rates in the buffer layer and three independent techniques were compared.

In this study a dynamic model which reproduces the essential features of the evolution of sulfate aerosol to CCN in the marine atmosphere is presented. Sensitivity parameters are explored for the sulfuric acid accommodation coefficient and the nucleation scaling factor, which were found to be critical in assessing the DMS/CCN link.