Improving our technological and analytical approaches to studying organic functional groups has proven to be increasingly important in our understanding of aerosol composition and behavior, and thus in assessing our global climate and air quality issues. There are a large variety of compounds that can make up the organic fraction of particles that affect the hygroscopicity of aerosol particles and therefore their size, residence time, and optical properties. One such method to identify and quantify the components of the organic fraction of aerosols, beyond characterizing the hygroscopicity of the components, is Fourier Transform Infrared (FTIR) spectroscopy. This technique estimates bulk organic carbon from the number of carbon bonds present in functional groups and subsequently organic mass from the molecular weight of each functional group associated with the measured bond type. The use of FTIR spectroscopy with X-ray fluorescence (XRF) measurements and size distributions can provide a full picture with reduced uncertainty of organic mass (OM) composition, aerosol source type, and scavenging coefficients. The following articles are case studies and products of this technique in the field of organic aerosol research. 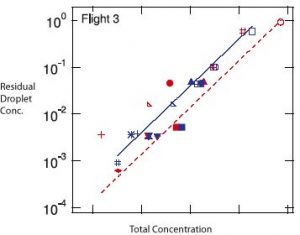 An aircraft aerosol sampling over San Diego used FTIR spectroscopy and XRF to evaluate the partitioning of 18 organic and elemental components between droplet residuals and unactivated particles in and below DYCOMS-II marine stratocumulus clouds. Filter samples were found to be dominated by internally mixed aerosols containing sea salt, ammonium, sulfate, and organic compounds, and a uniformity among scavenging coefficients was found to be consistent with aged or processed internal mixtures of these components. 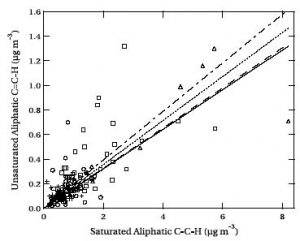 FTIR spectroscopy was used in ground & aircraft-based measurements of four east coast platforms. Samples from the Twin Otter, OH had the lowest OM-to-OC ratio (1.4) while the ratio measured at coastal platforms were between 1.5 and 1.6. Comparable results suggest that approximately 9% of the carbonyl groups at Twin Otter, OH are typically associated with low molecular weight carboxylic acids. 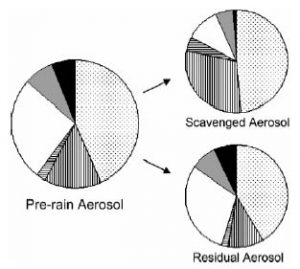 A ground-based ambient aerosol study using both FTIR spectroscopy and XRF measurements in Princeton, NJ found a large alkene fraction in OM from motor vehicle emissions. Measurements before and after rain events indicated high alkane fractions in OM, this indicates that the removal rates have a weak chemical dependence.