The interactions between aerosol particles and cloud drops is critical to identifying how much they reflect solar radiation. The indirect effect of aerosols may include, less rainfall due to higher concentrations of droplets and smaller droplet radii, and also increased reflectivity and lifetime of clouds. This has been primarily attributed to the effect of anthropogenic aerosol emissions on the number of cloud condensation of cloud nuclei (CCN), with a resulting impact on cloud droplet number concentration (CDNC), sizes, and cloud optical properties (albedo). Aerosol dynamics and aerosol-cloud interactions include condensation, coagulation, aerosol thermodynamics, cloud droplet activation, and removal processes within clouds. Ship tracks in Monterey and the study of the stratocumulus-topped boundary layer (STBL) by DYCOMS-II have proven to be excellent case studies for examining these processes and their impact on Earth’s radiative balance. 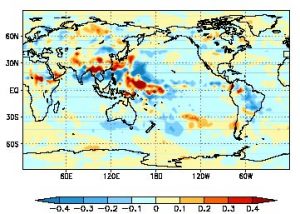 In this study the effect of solar absorption in clouds on climate in response to absorbing aerosols is explored to focus on the regional changes during the northern summer season. On a global scale that a reduction in low-cloud single-scattering albedo causes a warming of the surface, stabilization of the lower troposphere, and a reduction in the hydrological cycle, although the responses such as with shortwave flux at the surface and the hydrological cycle vary distinctively from region to region. 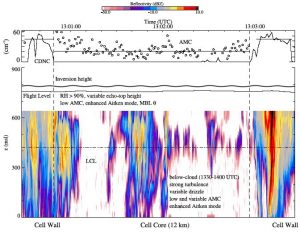 An aircraft-based study of a subtropical Pacific marine boundary layer identified the presence of pockets of open cells from regions where cloud radar echo tops were unusually variable. The pockets were found to have low accumulation mode concentrations and high Aitken mode particle concentrations, possibly due to an ongoing nucleation event. 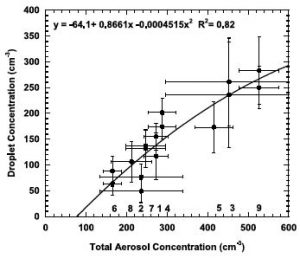 This aerosol study over the northeastern Pacific analyzed nine stratocumulus clouds to find a strong relationship between below-cloud aerosol particle concentration and droplet microphysical properties. No relationship was found between aerosol particle concentration and either calculated cloud optical thickness or albedo though, possibly due to varying liquid water content and cloud thickness from large dynamical influences.